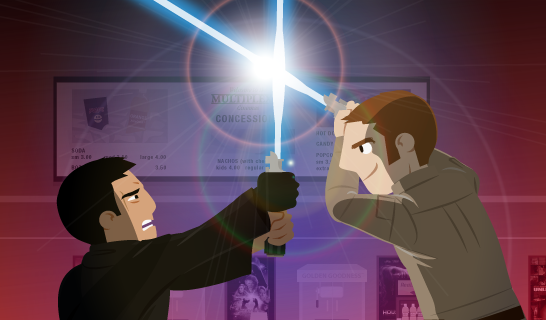 Multiplex is an online comic about the movie-loving and customer-weary staff of your local movie theater. It is written and illustrated by Gordon McAlpin. It has been running continuously since July 2005.

To learn more about the fictional Multiplex 10 Cinemas or the characters, please check out the New Readers page and the Cast Pages.

Multiplex is supported by readers like you through Patreon. One-time donations are awesome, too, and are accepted via PayPal and Square Cash!

Gordon McAlpin is a professional freelance illustrator, designer, and animator living in Somerville, MA, with his fiancée Karyn and their cats, Dipper and Mabel. He has an MFA in Graphic Design from the University of Minnesota. Gordon has written movie reviews, co-hosted a movie podcast, and edited a movie news blog. While he has never worked at a movie theater, he has had several equally terrible jobs.

From 2004–2006, Gordon created Stripped Books, a series of non-fiction strips covering book- and comics-related events in comics form. Multiplex began in July, 2005, and was Gordon’s first on-going comic strip. It concluded on April 10, 2017.

Gordon drew Multiplex in Adobe Illustrator on a Mac and happily endorsed the Astute Graphics's Phantasm CS and VectorScribe plug-ins. He uses Coda to update and maintain the Multiplex website.

Feel free to e-mail Gordon with interview requests or other questions, unless you are a spammer.

A low-res photo of Gordon (taken by Charlene Epple) can be downloaded here. A high-res version is available here.