Perpetually crabby Jason is half Filipino, half white, but proudly identifies as Filipino when convenient, such as when he’s cracking racist jokes — ironically, he claims, because of his mixed race and leftist politics.

In Summer 2006, Jason started dating fellow Multiplex 10 employee, Devina Trivedi. When Devi returned to school in the fall, they continued seeing each other long distance. Devi returned to the Multiplex 10 again, in the summer of 2007, but Devi and Jason had a rocky transition back to a same-city couple and soon broke up.

Shortly after, Jason confessed to Becky that he was in love with her and had been for some time. But when Becky didn’t leave her boyfriend Jay, he quit. He worked several jobs, including a sub-par pizza joint called Pizzeria Paradiso after leaving the Multiplex, but seemed to get fired from each in quick succession. After a few weeks, he started hanging around the theater again to see free movies, but avoided running into Becky until Melissa confronted him about it.

Once Jason had started talking to Becky again, his resistance to coming back to the Multiplex 10 disappeared, and he asked for his old job back, but a shuffle-up in the Multiplex 10 management ended up with Jason taking over Kurt’s shift supervisor position instead, with Kurt getting promoted to shift manager.

In the spring of 2008, Jason and Angie started dating, and despite a rocky beginning, had somewhat of a calming effect on him. But after Jason dragged Angie into a second major argument about religion, the two broke up amicably.

Since then, Jason started dating Lydia, a fellow film snob and hair stylist at the neighboring Dye Another Day salon, but started hanging out with Devi again… not entirely platonically. Jason seemed to have some difficulty deciding what to do about Lydia, but eventually decided to call things off with Devi in order to see where things went with Lydia. “Fate” intervened in the form of Keith, however, when he shared with Lydia some… less than gentlemanly comments of Jason's he'd made early on in their relationship, and she dumped him.

Devi and Jason have remained close friends, however, occasionally hanging out or visiting classic movie theaters so she can photograph them. She gave Jason her old camera for Pancha Ganapati in 2009, in order to help foster his burgeoning interest in old theaters.

More recently, Jason struggled with a short-lived bout with caffeine addiction, but managed to kick the habit after a soul-baring conversation with Lizzie Stoner. Since then, he's been seen occasionally partaking of a much more benign substance, marijuana.

Shortly after Jillian (Jailbait) started at the Multiplex 10, she started gravitating towards Jason and eventually more or less told him that she had a crush on him, but Jason rebuffed her sort-of-advances because she was still only seventeen and his subordinate — but as soon as she turned 18 and quit working at the theater in order to leave for school, she found her way onto his couch for a (PG-13) make-out session. After starting film school in California, though, Jillian found a steady boyfriend, and the two made an easy transition into a more platonic relationship.

In the last year or so, Jason begrudgingly helped Kurt develop his screenplay for a zombie movie. After Angie quit the production, Jason took the opportunity to replace her with Becky and do a major rewrite (largely of the last half of the film). The resulting film drew a mixed reaction from its audience, but the Multiplex gang (and even Norma!) seemed to enjoy it.

Upon seeing the completed film, Norma seemed to be convinced that Jason's handling of its production hinted at some newfound maturity and promoted him to shift manager — perhaps with a bit of lobbying from her daughter Monica, with whom Jason has become friends.

Jason had remained single for a long time, though he did try his hand at internet dating with little luck, but when a thinly veiled line in the zombie movie about his never-totally-forgotten love for Becky made her realize Jason’s real feelings for her, she took action, and they've been together since.

Jason graduated from Columbia College in Chicago with a Film Studies degree in Spring 2011.

The Lives of Others has replaced Fritz Lang’s M on Jason’s top five favorite films list. More recently, The Apartment seems to have made its way to the top of the list (what film it bumped is unclear). 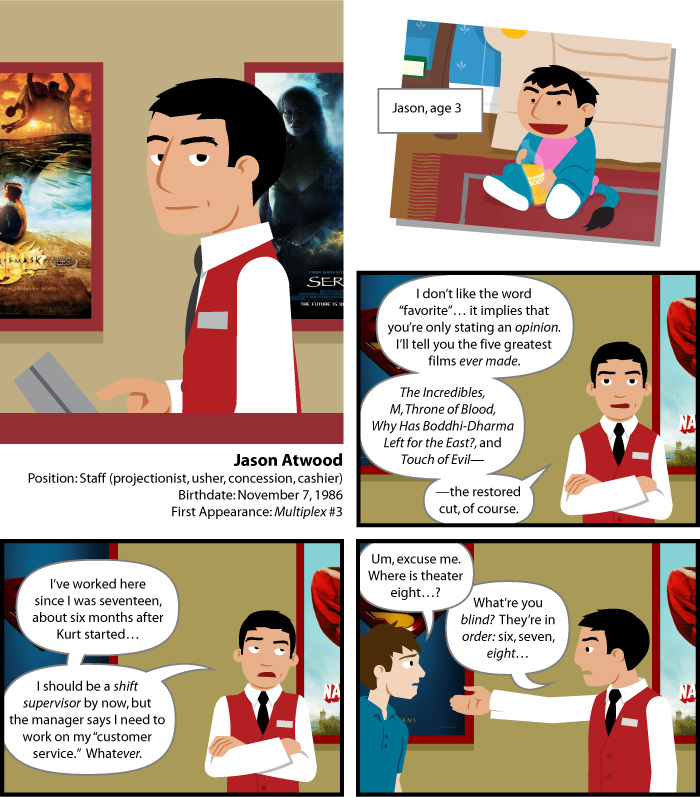