Kurt has worked at the Multiplex 10 since he was 16. He can swing a mean broomstick, and he has a bit of a competetive streak. One of Kurt’s chief interests is special effects — particularly practical and make-up effects for horror movies. Kurt does the make-up and splatter for the gang’s practical jokes. Although he has a juvenile sense of humor which rubs off on those around him, Kurt takes his job seriously and was often seen filling in for the largely absent management, when he was a shift supervisor.

He is Melissa’s boyfriend and perhaps the only person who likes Jason because of, not in spite of, his often difficult personality. After Jason quit in the fall of 2007, Kurt was sad, but he got by with a little help from his friends.

Six months later, one of the assistant manager positions opened up, and both Neil and Kurt were bumped up, with Kurt taking Neil’s old shift manager slot and Jason being rehired to fill Kurt's shift supervisor position.

More recently, Kurt and Melissa seemed to start arguing a lot, apparently stemming from Kurt saying that he didn’t feel Jay working at the Multiplex was a good idea, because of his relationship with Becky — but it all, or most of it, at least, turned out to be a plot to convince Gretchen that Melissa and Jason were having an affair. (Gretchen took the bait and, as they hoped, printed the false story in The Multiplex Examiner, getting her fired as a result.)

Recently, Kurt has coerced Jason into helping him make a zombie movie set at the Multiplex 10 Cinemas. Unfortunately, the script evolved a little bit once Jason took over.

Kurt studied Business Management at Columbia College part-time for a few years, but he dropped out without finishing his degree.

Kurt was promoted to Assistant Manager in Fall 2014, after Neil left for the Kalamazoo 8 theater. 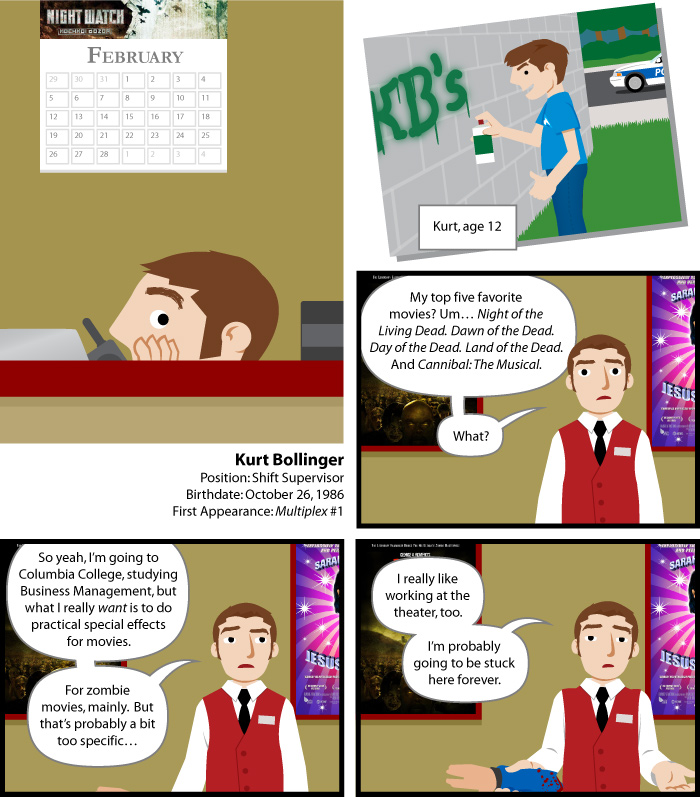